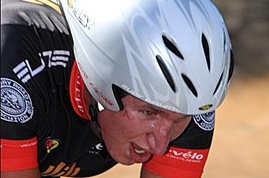 Travis Burandt of CRCA/Sakonnet took the last Nationals podium spot by getting fifth. Unfortunately the team’s top TT specialist Guy East was unable to race due to illness.

CRCA Junior Development/Orbea riders Connor Sallee and Evan Cooper were satisfied with their TT efforts. Connor came in 20th, 2:40 back. They will be competing in the crit on Thursday and the road race on Sunday.