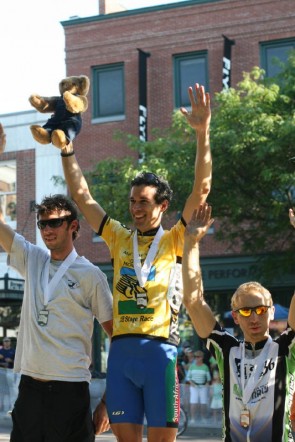 Brian started riding in the mountains of North Carolina for fun before moving to Nepal and Brazil to serve in the Peace Corp for 3 years. Returning state side to do graduate work at Columbia he was encouraged to start racing by the Columbia cycling team. Starting in collegiate D’s in 2007 he moved up to A’s by the final 2 collegiate races of this 2008 season.

Last year Brian came up to GMSR with his 1989 steel Specialized road bike “tempted more by the road trip, fun times with my Columbia teammates. I didn’t train specifically for it and managed to crack on the road race.”

This year was different. Four months ago he told his coach Greg Choat that he wanted to win Green Mtn. They began preparing for the race. “Greg did a fine job in breaking me down and making me stronger.” Not only didn’t he return with his steel bike but he owes special thanks to teammate, Stoffel Prinsloo who generously lent his Zipp Wheels which Brian says “made the climbs and time trial so much easier.”

“I was a little disappointed with the announcement of the time trial over the mass hill climb but was quite satisfied that no time trial bikes were allowed; it was a great equalizer. I don’t have either the money or room in my small apartment for a time trial bike. Matt Cuttler started right before me so I had a strong, solid target to chase for the first part of the course. I remembered him in Mengoni as we worked together in a short-lived breakaway. The race went well for me; I averaged 397 watts for about 15 minutes and finished 5th but a distant 9 seconds behind the star of the day, Hamlin.”

“My objective for Stage 1 was simply to conserve for the road race. It was a 2 lap, 64 mile course riddled with ice heaves. About 20 minutes into Lap 1 one break began to form and the field began to speed up. The yellow jersey, Hamlin, blew a flat. Despite calls for people to wait, the field surged ahead and Hamlin was never to be seen again; in the end he lost nearly 4.5 minutes on the field. The rest of the race was pretty much us together until several miles near the end where Cuttler decided he felt great I finished the race in a safe position and burned very little energy for the day. Mission accomplished.”

“It was epic. In the first 20 miles we went slow enough for us to actually enjoy the amazing weather and scenery. Then the first climb kicked in. The step-function-like climbing was not too challenging but taxed the legs nonetheless. The descent was fast but not technical. The group funneled onto Rt. 7 which proved to be one of the most boring race stretches I’ve ever experienced – straight, flat, wide, and all this with a strong headwind. Shortly after we hit Rt. 7, I believe Pascal Sauvayre (he would have to confirm that it was him), an incredibly strong (and ballsy) rider, attacked the field into the headwind. I am not sure what his intent was but I guess he felt that the field just wasn’t going fast enough. We reached the dirt section and things at the front were pretty clean. I heard one of the Espoirs Laval riders bit it hard though after he lost total control of his bike as he waved his hand to signal a flat.

“I believe somewhere along Route 110 some major moves were made. A break of about 8 guys took off the front. This break included Sauvayre (where the hell is this guy getting the energy?), Kim Riseth, Laflamme, Cuttler, and a few others. They managed about a 40+ second gap on the field before the start of Baby Gap. I watched as the break disappeared around a distant turn and I considered them gone. I shifted my attention to Miller, a tall, lanky but strong rider from Park City wearing the yellow jersey who apparently was more of a mountain bike rider than a road rider. We led the group up the final climb and I locked into a wattage I knew I could sustain for 20 minutes without cracking. Miller and I rode up the climb together passing each other occasionally until with about 3K to go he attacked me. I didn’t respond but kept my pace and caught his wheel again. He turned around, saw me right on his wheel and stood on his pedals. I took it that he was tired and accelerated past him firmly seated; he was done. With 2K to go I saw what was left of the break ahead of me and focused on Sauvayre. I caught them with about 1K left and continued with my pace, passing them, and headed to the top of the pass without looking back. With 100m left, I left my seat and cranked up the last 20% grade, turned around and saw only the SRAM car behind me with wheels atop its hazard lights on. I was in total pain but I gained 11 seconds on them. Later Alan Atwood asked me in an interview (which I can barely remember) how it felt being in the break coming up. I told him I wasn’t in it.”

“I thought the day was going to go all wrong for me when I woke up the morning of, stretched and dislocated a bum shoulder (which only happens about 1 time a year). After reducing it, I was sore but didn’t mention it to anyone hoping I would forget it. I went in the crit knowing that my position was seriously threatened. I only had 3 seconds on Miller and 13 seconds on Laflamme, the sprint leader. There were 31 seconds of 1st place sprint points available for fast sprinters and I wasn’t one of them. On top of that, Laflamme had a strong team mate to assist him for sprint positioning. Adler offered their CRCA support so I asked them just get as many of the GC sprints as possible. With 25 laps to go, Laflamme took a 6 second prime while I took nothing. Things started turning hazy for me here so I am sorry if I am wrong. I believe with about 18 laps a break of 6 guys including Adler’s Olsen, Bliss’ Hamlin, and CRCA’s Chaput began producing a gap on the field. Olsen and the others ate up all the sprint and GC points leaving my contenders, Miller and Laflamme with nothing; this was fine with me, we maintained our positions and Olsen began climbing from his. After we only had 5 laps to go, I started to relax knowing that the break wasn’t going to be caught and thus, no more GC bonus opportunities for Laflamme and Miller. I felt free to openly gas it with Miller and Laflamme (Laflamme, that is, who had been working the hardest during this whole time to minimize the 45 second gap the break had created). After that we were foes turned to friends. We gassed it together and reduced the gap to 38 seconds hoping to secure what was left of our positions.”

“I truly believe that winning a race like this is 1/3 strength, 1/3 strategy, and 1/3 dumb luck. In my case, the dumb luck of Hamlin blowing a flat in stage 2 and never being able to catch up to the field turned out to be a blessing for me although I would never wish a flat upon anyone. I want to give a special shout out to my team, SouthAfrica.net who are about the nicest group of guys I know in the CRCA and have supported me all along.”