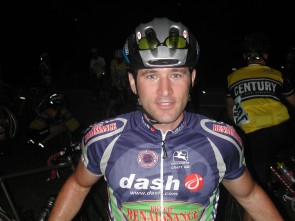 Basil in his Dash-Renaissance kit, 2001

Basil Moutsopoulos is one of the people most responsible for making the CRCA/Sakonnet program one of the preeminent espoir development programs in the country. He helped start the program as a club sub-team and turned it into a national level team. For 4 years Basil was the Director and General Manager of the team until he brought Matt Koschara in to help last year. Basil has turned the major responsibilities over to Matt this year and is moving to California at the end of this month. Mike Green was able to catch up with him on his return from Switzerland where he completed his first Ironman. The club owes a huge debt to Basil and we thank him for his great contribution.

MG: How did you get involved in the Sakonnet program?

Basil: I moved to the City in fall of 2000 to accept a job. I remember thinking during the interview process that moving to NYC would be the end of my cycling but I was turning 30 and thought it was time to get serious about my career so I took the job regardless of what I thought would be the end of my riding. I had never heard of the CRCA so I didn’t know what to expect upon moving here.

I did of course bring my bike with me as I thought I could do some laps in the park after work. On my second or third ride in the Park I was passed by Eric “Kyoo” Min of the then CRCA/Dash – Renaissance team, I was in the kit of my previous team from North Carolina and I guess it stuck out as Kyoo slowed down to talk to me. Quickly he ascertained that I held a Cat 2 license and on the spot offered me a place on the Dash team that he was running.

A year or two later Kyoo went on to become one of the founders of Sakonnet Technology and when Dash dropped their sponsorship Sakonnet picked up where they left off. 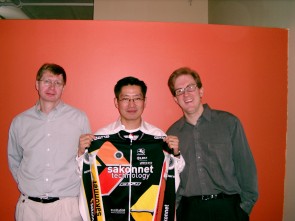 MG: What were the original goals? How did the program get started? How has it evolved?

Basil: When Sakonnet came on as a sponsor the team was basically the same as it had been during the Dash days meaning we were a great local team of thirty plus year old riders that had lots of success in local and regional races. Kyoo had stepped down as team manager as he had his hands full with his start up, as I had experience running a program in college at the University of Florida and because quite frankly no one else wanted to do the work I became the team manager.

That first season as Sakonnet or should I say CRCA/Sakonnet – Larry & Jeff’s which was the team’s official name we had another season of great success locally and regionally. Our team duty that year was to run registration at the Lou Maltese race which was a junior only race at the time and I had the idea of trying to recruit some juniors for the following season. We had a good budget for a local team which was made up of successful young professionals and it just felt like the right time to give back to the sport. Unfortunately there weren’t many juniors and the idea of starting a junior team was scuttled.

One local junior named Luis Perez kept calling us wanting to ride and to learn about racing and so we adopted him mid season into the team. A month or so later at the Union Vale Road Race we met U23 riders Greg Abrahamson and then Lee Rosenthal who were from NY but lived most of the year in Colorado as they were in school there. Since not enough juniors were available the original idea changed to having a U23 component to the team. We signed up Greg, Lee, two of their college buddies Andy Guptill, Chris Kuhl and thru a referral a kid name Robbie Giannini.

Kyoo, his two partners Thurstan Bannister and Alarik Myrin where 100% behind the idea of a development team and so they increased their sponsorship for the following season. The team had two parts and was known as CRCA/Sakonnet Technology for the local riders and CRCA/Sakonnet Technology U23 for the development division. The goals of the development team were to help the kids reach their potential both on and off the bike. On the bike we took them to national caliber events where they could make a name for themselves and off the bike we spent time mentoring the kids thru school issues and various relationship problems. 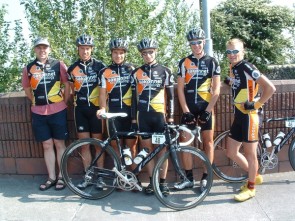 The original five riders at the 2002 Tour of Ireland

MG: Can you sum up the accomplishments?

Basil: Looking back its amazing how much we were able to do for our riders with what was truly a small budget. The short list of accomplishments from previous seasons are fantastic performances at international races like the Tour of Ireland (03) the Grand Prix de Beauce (04), multiple top ten placings at U23 Nationals, top ten performances at NRC events and of course the graduation of Sakonnet riders to the professional ranks.

What the team has accomplished so far this season is astounding and full credit for those performances goes to Matt Koschara the teams current General Manager.

MG: Why did the program start in CRCA and why did you always think it was so important to keep it part of CRCA?

Basil: Dash was a CRCA team so it was only natural that we continue the program within the CRCA but that is not the whole story. We always felt that the CRCA was such an incredible organization and that being a part of the club was important. We wanted to let the whole country know that bicycle racing was alive and well in New York City.

MG: If you’re not up with the latest news, CRCA Treasurer Ben Harris is organizing a benefit to raise money for the team to go to Nationals.

Basil: I’m very happy to hear this as Nationals have always been a big goal for the program and with this support the team will have another shot at garnering that elusive Stars and Stripes jersey. 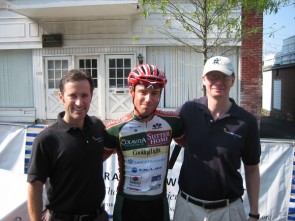 MG: What’s the future for the Sakonnet program?

Basil: My hope for the program is that it continues indefinitely as development is the future of cycling. Without development and young riders coming up we’ll all be racing each other into extinction. Perhaps the club will be able to some day gain non for profit tax status and then the club will really be able to raise big money for development programs. The club boards that I have worked with over the years have always been very supportive of our program but they were limited in what they could do as board seats would change every year and there was no long term vision that could be planned on. With a 501.3c tax status the CRCA could become just like the NYRR and the club be able to reach its full potential in both development and expanding bicycle racing in the area.

MG: What’s the future for Basil? What’s with you doing an Ironman?

Basil: The big news in my life is that my wife Tracy and I are moving to Northern California on August 1st. She’s from there and we’ve been looking to move closer to her family for a couple of years now. In regards to my dabbling in triathlons, my wife can take credit for this as she was the original triathlete in the family. We got married in May ’06 and there was no time for training but I was running a little to stay somewhat fit. After the wedding I entered a tri she was doing and had fun with it. By the end of last summer I lost my mind and signed up for Ironman Switzerland; The race was last Sunday and Iim glad to say the race went well and I finished strongly in just over 11 hours despite 55 degree weather and pouring rain throughout the event.

MG: Did you get started in competitive cycling in college?

Basil: I started riding and racing my senior year of high school. I ran cross country and played on the soccer team and I was looking for another sport to do that would keep me out of trouble. It was when I got to University of Florida that I realized that cycling would be a continued part of my life.

MG: What was cycling like in U of Florida?

Basil: It was great as Gainesville is a perfect location for training and we had some local pros like John Leswyn, Bobby Livingston and Karen Bliss in town to learn from. In the early 90’s there where some big races held down the road in Ocala and so we had all the pro teams in town for two weeks a year.

MG: Looking forward to California? Are you going to keep racing?

Basil: I am looking forward to moving out west and the change of scenery. It’ll be fun finding new roads and group rides. Because of the good weather I’d agree that the racing in California is stronger in the spring as riders there can train all year long but come summer time you don’t solely see California riders dominating the national scene, east coasters catch up fitness wise by May and I would say the east coast racing scene come May is as strong as California racing scene.

MG: Are you ready to race out there or are you going to be a semi-retired triathlete?

Basil: I’m looking forward to racing cross this winter and perhaps getting back into the road scene next season. As far as triathlons go I’ll be doing some of those as they are fun. I would like to try my hand at 24 hour Mountain Bike racing if I find an opportunity.

MG: How does cycling now fit into your life?

Basil: Cycling has and always be a big part of my life. You have to make time for it when things get busy but it’s always there. My wife rides and so I am lucky that I always have a riding partner to go out with.

Basil: I’d like to thank all the sponsors, people that have helped the team over the years and the riders that have been in our program. Special thanks go out to the principals of Sakonnet Technology with whom we could have never started this, the gang at Larry’s Bicycles Plus that served as our team home base, Joao Correia from Bicycling magazine who opened doors for us and Matt Koschara for taking our vision and moving forward with it.