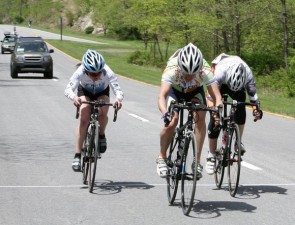 Congrats to all, as Bear is a true beast and I can only imagine the torture of a 4th lap! Something to look forward to, I suppose. Fortunately as a newbie, I was comforted at the start to find that several other riders were new to Bear as well.

Think we were all relieved by the neutral start and the majority of the 35-deep pack rode together on lap 1, with Elizabeth McAlpin, Maria Murphy and Liz Feeney leading the climb at a decent pace.

Suppose it was the calm before the storm, as lap 2 got a bit hairy on the descent, with several riders vying to get through the hairpin first. Unfortunately Kathleen Rucker of Kissena, who was riding a strong race, took the turn slightly too fast and ran off onto the grass. Fortunately, no other riders went down, but the field broke up a bit, as 15 riders were up the road climbing toward Tiorati. Again Murphy was on the front, as was Madrinan, Karmiel and Perkins, trying to push the pace and gain some separation.

Lap 3 clearly demonstrated that Bear is a race of attrition. The descent and turn went well, but suddenly we went from double figures to just four riders going strong up the hills. Alejandra Madrinan led a fierce pace and Killmon, Karmiel and Perkins worked hard to stay on her wheel. Yes, fatigue was setting in and anxiety levels were rising as the white flag and line approached.

And then there were three! Yes, at the Seven Lakes rotary, Killmon, Madrinan and Karmiel remained and began working together in a smooth and speedy paceline to stay away. The three actually became friendly, thanking each other as they crept through the feed zone, with tensions rising as the finish loomed around the final bend.

With fans yelling support and advice to ?be patient,? or to ?wait and go late!? the three rolled along almost side by side, anxiously waiting to see who would make the first move. Suddenly, from about 250 meters out, Killmon jumped out of her saddle and began to accelerate! Think she caught the others by surprise, as she gained some separation (not even a bike length!) and put her head down to motor through the downhill finish. Yeah, turns out it was good to go early.