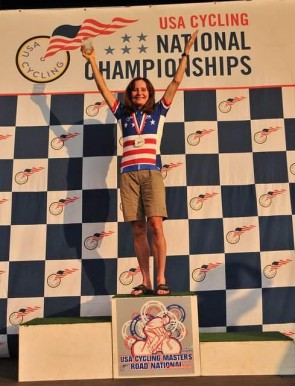 Louisville, KY hosted the 2010 USA Cycling Masters’ National Road Cycling Championships with the Road Race Championships held in historic Cherokee Park. Since the designer of Cherokee Park, none other than Frederick Law Olmstead, also designed New York’s Central Park, where I train every day, it is no wonder the courses are eerily similar. Both parks feature serpentine drives coursing through woodlands and rocky outcroppings, although Cherokee Park has three longer hills, as opposed to the 2 longer hills in Central Park. There are far fewer other “park users” competing for space in Cherokee Park, too, so there is little chance of running into recreational cyclists, bladders, runners, pedestrians or pedi-cabs.

The extreme heat and humidity had taken its toll on racers all week, with temperatures hovering near 100 degrees every day. Thunderstorms Wednesday night and Thursday morning brought some relief from the heat, although they left wet, slippery roads to play havoc with the races.

My mom, my sister Jane Blevins, my niece Jessica Blevins, and my boyfriend Tim Snell accompanied me to my Road Race, which was 6 laps of a 5 mile circuit in Cherokee Park. As I was prepping for my race, the skies were overcast, and there was a light shower, which made me cautious about wet, slimy road surfaces. We were warned at the start that there had been several crashes in the morning races due to slick roads.

There were several formidable riders in my field, Ariette Clauss, who had won the Time Trial two day earlier, as well as Betty Tyrell, a multi-time Masters’ National Champion from New Jersey, and Margaret Thompson, also a former Master’ National Champion from upstate New York. Plus there were several riders I did not recognize, and you never know what really strong riders may show up.

Right at the start, one of the riders I didn’t know attacked and the field was strung out. I wasn’t eager to start off at top-speed without the chance to see how slick the roads were. Lees than a mile from the start, there is a nasty S-curve descent, where the pavement is rough and there are longitudinal cracks. I approached the S-curve cautiously, as a couple of women kept hammering into the turn. One of them almost slid out as she hit the cracks in the pavement, and I hoped she would not crash in front of me. I decided to go to the front to avoid any sketchy riders.

The first time up the biggest hill on the course, which is about 1.5 miles form the finish, I was at the front, and could tell I was stringing out the field. I stayed near the front as we started the second lap, and as we passed through the S-curve descent, I heard a crash behind me. I was happy I decided to go to the front and other came forward to join me.

The second time up the big hill I pushed the pace a little harder and saw I had a slight gap on the other riders. My original plan was to attack on the hill on the 5th lap, and if I couldn’t get a break, attack on that hill on the final lap to break things up before the finish climb.

On the third lap, the field was pretty quiet, and there were a lot of riders just sitting on. I decided to push it a little more o the big hill to try to shed some riders. I started up the big hill at my own pace, and b the top, only the Time Trial winner, Ariette Clauss, and I were left. We immediately started working together, but I knew the others were chasing, so I told Ariette we should try to gun it on the feed zone/finishing hill. I took off up the hill, thinking she was on my wheel, but when I got to the top, she was no where in sight, so I thought, “Gotta go now”, and I accelerated again.

Just a few hundred meters into the 4th lap, I was passing riders who had been dropped by the 50-54 field that started 5 minutes before my field. I was going so fast, I almost passed the lead moto for my field, and I yelled at him to go faster, that I was in the field he was supposed to be leading. I think he thought I was part of the other field.

I just kept my head down and went into Time Trail mode, glancing back frequently to see if Ariette or anyone else was closing in on me, but I saw no one.

At the start of the 5th lap, the moto drew next to me to tell me I had over a minute lead on one solo chaser, with the field over 1:30 back. That news gave me hope that I could hold my lead, and I kept going. Later in that lap, the moto said I had a 40 second lead on the chaser, and 2 minutes on the field, so I drilled it even harder. The last thing I wanted was to get caught right before the finish.

As I came through the finish line for the start of the bell lap, my sister, niece and boyfriend were screaming to urge me on, and I felt like I could hold off the rest of the field. Early I the bell lap, the moto dropped back to find out the gap to the next rider. I plowed on alone, and when he returned, he said I was up to over a minute on the lone chaser. I figured with less then 3 miles to go, there was no way she could overcome that much time, but I didn’t want to get over-confident, so I settled into a steady tempo. I glanced back as I started up the big hill the last time, and seeing no one behind me, poured it on as hard as I could.

When I got to the final climb I was passing what was left of the peleton form the previous race, and I picked my way around them as I charged toward the finish I could hear my niece screaming to me all the way up the hill. I sprinted for the line, and won solo.

Ariette Clauss was second, with Barbara Grabowski edging out Betty Tyrell for third in the field sprint. I was thrilled my family had come along to support me, and was ecstatic to repeat as National Masters’ champion for the Road Race.