A Fitting Farewell at Harlem 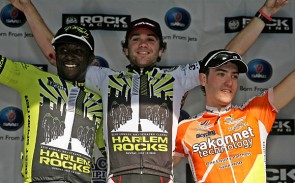 CRCA/Sakonnet’s Jake Keough’s third place finish in the Skyscraper Harlem Classic pro race was a tremendous result against the best crit riders in the country. Jake’s now moving on into the pro ranks. Below is his account of the Harlem race and his season with Sakonnet. Great work by Jake and great work by the Sakonnet team.

This Spring has been one insane adrenaline rush. From the minute I won Grant’s Tomb, to my 3rd place at the Skyscraper Harlem Crit, I have been full gas, and loving it! Racing for CRCA/Sakonnet Technology U25 team has presented me with opportunities to lead a team, race in the biggest criteriums in America, and get the results I needed to accomplish my greatest goal of the season. I signed with Kelly Benefit Strategies/Medifast Pro Cycling for the second half of the 2008 racing season.

Going into the 2008 season I knew that I had laid the ground work for a stellar season, the hard part is proving it to everyone else! After racing in the Southeast with CRCA/Sakonnet, I had convinced many, and began talking to several pro teams. When the dust settled I found myself riding with Kelly and I could not be more happy with my decision. As a young sprinter my dream was to ride for a true sprint team, and in the US, the Kelly train is both feared and respected like no other team.

My last race with Sakonnet could not have been more fitting with the race being held just a few blocks from Sakonnet’s headquarters in New York City. The race was just my style, flat four corners with some rough pavement, and a super high quality field. the venue was great with Mike Ball from Rock Racing really putting on a good show. This race needs to be an example to all other criteriums in America. If we want to create a scene around cycling and get Americans interested then this is the venue we need. The jumbotrons were awesome, the fans could see the race fly by, watch the lap in its entirety, be able to understand how the race developed, and get an extremely entertaining show at the same time! If all downtown crits were run this way we would have a huge American fan base in no time. This is the future of American bike racing!!

The race played out exactly as I had hoped, with a small break getting established, the field settling in and bringing it back with a few laps remaining. I conserved energy and followed a few major moves during the race but was focused on the bunch sprint. With 2 to go I was locked on to the Rock Racing train, but got swarmed going into 1 to go. I did my now standard last lap kamikaze riding and got to the front but got boxed in going into the last corner. I was a little too far back when I opened up my sprint and just ran out of road before the line. My sprint was super fast, but without perfect positioning it is near impossible to win. Third place was a great result and I was glad I could deliver one more time for CRCA/Sakonnet.

Next on my schedule is the Tour of Pennsylvania racing for Kelly Benefits. Thanks for the support and the great race in Harlem!