Harry Schwartzman of NY Bike Jumble has put together a very interesting exhibit on the history of the Coney Island Velodrome. Using newspaper articles, race programs, bicycles and many photos the exhibit creates a sense of how big track racing was in New York. Many of the photos are from the CRCA archive and we were very happy to help Harry who did an excellent professional job in producing the exhibit. The exhibit is at the Old Stone House in Park Slope through June.

BROOKLYN,NY. NYBikeJumble,NewYork’s premier organization dedicated to the preservation and continuance of cycling culture across the five boroughs, and The Old Stone House, a vibrant community center dedicated to the history of Brooklyn, announce the opening of ‘Strong Backs, Weak Minds: The Saga of the Coney Island Velodrome’, a new exhibit detailing the history of New York’s last commercial velodrome in Coney Island.

The Coney Island Velodrome opened on July 19, 1930, as the world slipped toward the Great Depression and war. Already, the popularity of cycling, having peaked in the early 1920’s, was waning and the construction of a 10,000 seat bicycle racing arena was an act of supreme optimism. 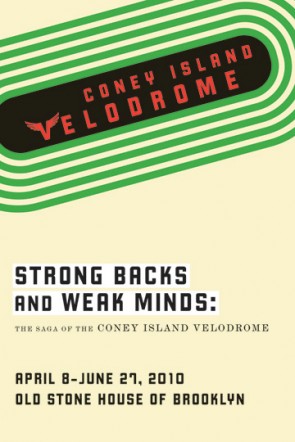 Regardless, the track became the last velodrome in America offering the thrills and chills of motor-paced racing, where riders raced behind motorcycles to attain speeds in excess of 50 miles per hour.

Many of the people who became instrumental in promoting cycling in New York in subsequent years cut their teeth on this track, and the Coney Island Velodrome was the last time in the city’s history where cycling was a indispensable part of daily life.

Until today. As cycling has made an incredible comeback, this exhibition connects the past with the present, reminding New Yorkers that cycling has always been a fixture of our urban fabric.

The exhibit features bikes that were raced on the track, as well as photos, programs, tickets and other ephemera, including a special ‘Stayer’ bike for motor-paced racing and New York-built track bikes from long-forgotten builders.

This is the first exhibit to focus on this recreational and entertainment venue that was integral to the lives of thousands of New Yorkers. “At one point, New York had multiple velodromes that drew ten of thousands of spectators,” says NY Bike Jumble Founder and curator Harry Schwartzman. “Cyclists today are not recent additions to the public consciousness, but are continuing a rich tradition within New York City’s history.”