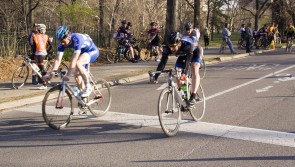 The 2015 CRCA Masters Series is fully underway now with Grant’s Tomb and the first CRCA Masters 40+ Club Race on April 18 behind us. The Masters 40+ Club race was an active race, won by Justin Inglis in a break of 4, followed by Chris Gurr of e2Value, Gregory Fowkes of Rapha and Doug O’Neill. Pascal Sauvayre (of Rockstar) and Chris Chapman (of Breakaway/NSX/Carve Systems) came in next as a chase group, followed by a remaining field of about 12 (results can be found here, but the overall field was undercounted).

There are three more Masters 40+ club races in the 2015 season, with the second one happening on Saturday, April 25. The hope is that this field will be better subscribed than the April 18 field, without conflicts with masters races at Battenkill and Prospect Park. CRCA masters racers can support this CRCA Masters racing initiative by showing up, registering for, and racing for this April 25 club 40+ field and the other dates in the series. In addition, CRCA masters racing provides an additional racing alternative for CRCA female racers. As per USAC rules, all 30+ cat. 1 and 2 women and 20+ cat. 3 and 4 women can join in the 40+ Masters races, and some were part of the April 18 40+ club race.

2015 marks the first year that CRCA is trying a team cup Masters 40+ competition and a Masters 40+ Boyd competition.  For more details, go to the new club webpage devoted to Masters racing found here. In addition, there is a Facebook page for CRCA Masters, that can be found here. This is a pilot program that depends on growing participation by CRCA masters racers. If CRCA Masters racers want this sort of Masters racing opportunities to continue, they need to support them now by participating in Masters club and open fields.

The 40+ Team Cup and Boyd Competition CRCA series will continue with the Masters 40+ field at the June 21 club race, another 40+ club race on August 8, and a 40+ field at the August 9 Club ITT championship at the Silvermine Time Trial in Harriman Park.