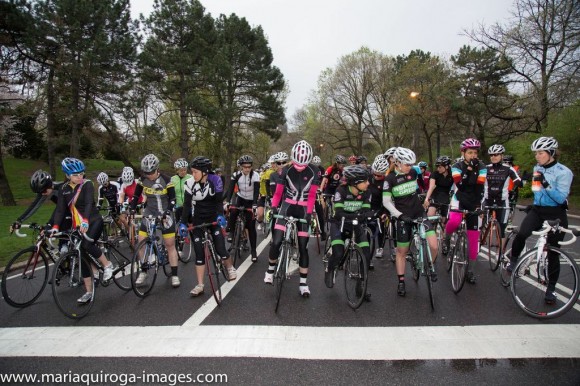 The 2013 edition of the CRCA Women’s Clinic saw record turnout despite overnight storms, wet roads, and the threat of continued rain. 45 women braved the uncertain weather to learn about bike racing (more than each of the men’s fields).

There were nerves and jitters, but excitement as well. CRCA coach Tara Parsons first went over a few safety tips. “Be mindful of your bike in relation to others in the peloton!  Avoid overlapped wheels. Hold your line and do not make sudden moves laterally or over-brake!” She also talked about relaxing on the bike, especially through the upper body, so that the front wheel and bike remain steadier. Tara discussed the race format and encouraged riders to be active in the race, no matter where they ended up in the field. Forming a race within the race can make this learning experience more fun and racers can improve their fitness and race skills faster than merely sitting in the peloton.

Once the participants were prepped with information, it was time to race! Before they could get more nervous, we blew the whistle and they were off.

We started with a calm and steady neutral pace over the first Harlem hill, and then the pace picked up. By the time we passed the West 96th street finish line for the first time there were a few attacks and racers pushing the pace. In that first lap the work at the front was shared by Christina Malfer, Oksana Miller, Nicole Mermet, Sarah Lewis, Erica Berthou, Ingrid Bell, Emily Chan, Jen Poirier, Iliana Rabun-Wood, and others. The pace remained comfortable with a lot of movement in the pack with riders trying to find a good position and getting used to the wet roads. Once we hit that second Harlem hill the pace picked up a bit more and the field began to be split. The size of the front group was still impressive though, as there were many strong riders! The field handled the downhill S turns near Laskar pool well, going at, as one rider put it, “speeds unheard of!” There were some more attacks and pace-busting on the 2nd lap on the East side in the 90’s, with riders really trying to set up for a break away for the prime. This move did resulted in some attrition from the front group and then an attack by Kari Lam on the 3rd Harlem hill completed a whittling down to 12 riders. A second group behind formed, allowing racers there to get their own race experience. A few racers, including Lauren Jones, were able to chase back onto the front group when the women’s field was neutralized by the passing A field at the south end of the park.

While there was some bumping and wheel touching within the peloton, it was impressive that the riders were skilled enough to withstand the bumps and not over-react. Eventual winner Kathryn Murtagh was particularly steady in the center of the field.

The final push to the finish began with a separation on the 4th and last Harlem Hill, with the top 7 or so riders creating a bit of a gap. After the hill, the top three riders, Kathryn Murtach, Kari Lam, and Nicole Mermet sprinted for the finish on West 96th street. Kathryn and Kari got a gap on Nicole, and then they both gave it their all in a full-on sprint. Kathryn just edged out Kari for the win.

All of the women who raced seemed to have had a fantastic experience. In their own words:

“The race itself was great – way faster and more tactical than I could have ever imagined! It made me realize how much [bike racing] requires focused thought, strategy, and tactics to win!”

“Training by oneself may give you mental toughness, riding with a club may give you close riding skills, but a race is irreplaceable for teaching a [cyclist] tactical skills needed for racing.”

“It was an amazing learning experience and having the support of awesome experienced racers by our side during the entire race was priceless.”

“I think what stood out to me the most was the general inclusiveness of the women’s racing community. All of the experienced female racers were so encouraging and helpful all throughout the week – from the info session on Wednesday night and all through Saturday (pre, during, and post race).”

“During a race, your entire self is lit by a fire that you can’t ignite in other activities. You tear every physical and mental limit, stretching the seams of every muscle.”

We may have made bike racers out of some of these women!

A big shout out to the CRCA Women’s Subteams and individual racers, the CRCA Board, our CRCA Coaches, and NYSBRA who have all worked tirelessly to grow the sport of bicycle racing among women. Let this year’s Clinic be a sign of great things to come…